Eight days passed between Hope’s operation and her hospital discharge, which may not seem like a long time, but the days passed slowly and painfully.

When Hope emerged from surgery, the surgeon assured us that everything went great. He tackled the smaller left side of her heart by building out the inside portion of her mitral valve. Hope was in heart block, meaning that the electrical impulses that cause the heart to beat had been compromised during surgery, which is a pretty common occurrence after bypass. To ensure that her heart wouldn’t fail her, an external pacemaker was placed that would kick in if her heart rate dropped below a certain rate.

We discussed with the doctors and nurses her pain management once the medications used during surgery wore off. But how could we possibly differentiate between pain and fear? Between pain and hunger? Between pain and confusion? The honest truth was that we couldn’t, but the nurses regularly checked Hope’s clinical signs for how she was acting, sleeping, and most telling, by monitoring her blood pressure.

Neither my husband nor I slept a wink during that first overnight following surgery. We just sat by Hope’s bed, staring at her in disbelief. We waited with bated breath for her pacemaker to kick in; for her respirator to fail her; for the dispenser of a dangerous medication, such as fentanyl, to go haywire and cause an overdose. We trusted nobody to watch her but us.

At some point during that night, between my ramped-up pumping sessions to try to overcome the stress that was suppressing my supply, I sat by Hope’s bedside and rubbed my finger up and down a small stretch of skin on her arm that hadn’t been overrun by tubes or gauze. Her blood pressure spiked, so I notified the nurse that she was feeling pain and needed help. The nurse had seen this before, and kindly but directly she said the problem was me. Hope felt stressed with me nearby, and it would be best for her recovery if I didn’t come so close.

But I’m her mommy. I soothe her to sleep. I feed her. I change her. I coaxed her first smiles from her. I carried her for 9 months. I dreamed of her for even longer. And in this moment when all I could offer her was the sound of my voice and the touch of my skin, it wasn’t enough…or it was too much.

I had no choice. I backed away to my corner of the room, and just as predicted, Hope’s blood pressure returned to normal. 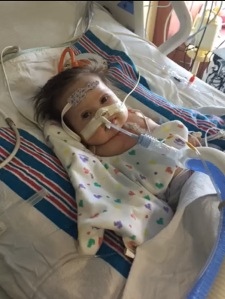 Moments before extubation, 2 days after surgery

The days that followed were agonizing. We were very in tune to the children around us and foolishly used them as benchmarks for our pain. The room nextdoor to ours changed over twice before we left, which felt incredibly unfair. A room down the hall was occupied by a teenage boy who was in an accident and had an unclear prognosis, which made us feel fortunate for our positive trajectory. We wondered what had happened with our neighbor from the week before who had a heart transplant and was cuddled only by the nurses on duty and an occasional visit from his grandmother.

What kept us in the PCICU for so long was Hope’s breathing. She wasn’t extubated until two days after surgery, which was relatively long compared with the small sample of babies we saw coming out of similar procedures. Her low muscle tone was to blame, and so we started feeling the effects of her Down syndrome on her recovery.

My most sustained fear leading up to surgery and during recovery was that Hope would lose her sucking instinct. Article after article detailed babies deprived of nursing or bottle-feeding for extended periods of time and forgetting how to do it. Our feeding therapist from home assured us that if that happened with Hope, we would work our tails off to get her back to sucking. That was comforting, but I didn’t want to reach that point.

Practicing sucking while on CPAP

With no more knowledge than the instincts produced by my mommy gut, I decided to keep Hope on a sucking schedule while she was limited to her ND tube (nasoduodenal tube, which bypasses the stomach to avoid reflux and aspiration while on CPAP). Prior to surgery she was eating every 3 hours, and so about every 3 hours I would put her pacifier in her mouth and encourage sucking for at least 20 minutes. The trouble was that Hope didn’t suck on a pacifier. We used it to soothe her in the early days on car rides and to keep her calm and still during her echoes, but she didn’t know how or desire to keep it in, and so I’d sit next to her bed, sometimes half asleep, with it in her mouth while she went to town.

When Hope’s ND tube was removed and changed to an NG tube (nasogastric tube, which feeds into the stomach), we were given 3 tries to get her to drink from a bottle. Three. And no attempts could be made without the feeding therapist present. 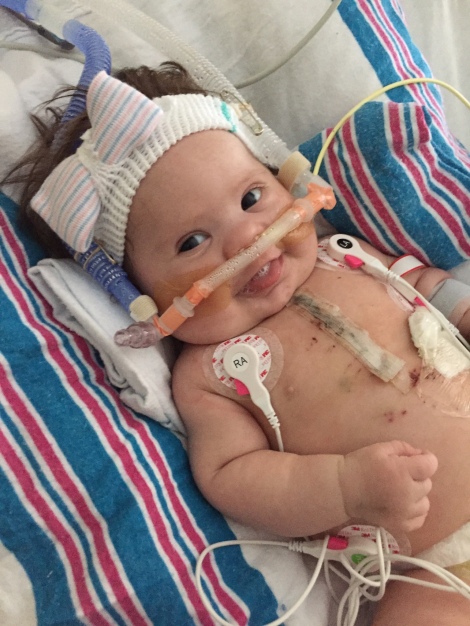 On Hope’s first attempt to drink from a bottle, she was so excited that she desperately started gulping away with zero coordination. She coughed, and that was it. Attempt one, fail. I pleaded with the therapist to let us try again; that the longer Hope is deprived milk from her bottle the harder it’s going to be for her to come at it carefully. The therapist saw Hope only as a project with a checklist, and we were not allowed to continue.

For Hope’s second attempt a few hours later, our nurse decided she should be the next one to try. After all, she’s had almost 10 years of experience getting babies back to bottles after feeding tubes. I, on the other hand, was just my baby’s mother who had been feeding her around the clock for the past 2.5 months. What did I know?

The nurse started with a nipple that was completely unfamiliar to Hope, who was using a special nipple to overcome her tongue protrusion and low muscle tone. I insisted that she use what Hope is used to, and she insisted back that babies love the nipple she was using. But Hope wouldn’t even open her mouth for it, and so the nurse reluctantly tried our bottle, and again Hope wouldn’t open her mouth. Plain and simple, Hope did not want to eat from this nurse. Hope gagged at the milk being forcefully spilled onto her tongue, and that was it. Attempt two, fail.

The feeding therapist had left for the day, and so we had to wait until regular business hours the following day to try for a third time. I asked if we could take the NG tube out of Hope’s nose for this attempt, thinking maybe that breathing through a stuffed nostril and swallowing with a tube down her throat could be distracting her, but I was denied this request. And so again I tried to bottle-feed my daughter, and although she did a little better than she had the day before, she only took a small bit before coming at the bottle desperately and coughing. The therapist said we could try again later in the day for a specially granted fourth and final attempt, and that was the winner. Hope did it.

We continued to bottle-feed here and there during the day, supplementing throughout the day and night with the NG tube, but she was one step closer to coming home. 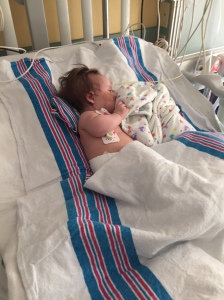 Although babies can be discharged from the PCICU with a feeding tube, respiratory therapy is a bit stricter. She couldn’t be moved to the inpatient cardiac unit (“6 Tower”) until she could maintain a healthy respiratory rate on her own. We met our last PCICU nurse 6 days after Hope’s operation, and when she found out that CPAP was what was keeping Hope from moving on, she was determined to wean her off. This nurse was our hero. She kept the respiratory therapist on a strict schedule, coordinated with Hope’s doctors, and by the next day, Hope no longer had the crutch of CPAP.

Hope graduated to 6 Tower that night. We didn’t know it then, but one single day filled with a few diagnostic tests was all that stood between us and our hospital discharge.