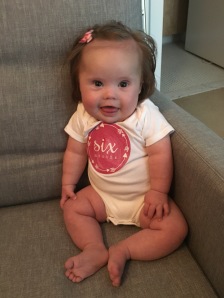 Our little girl turned 6 months old last week, and we are grateful for every single day of her little (BIG!) life. Six months carries so much symbolic weight for our family, marking the far end of the window Hope’s cardiologist gave us for when she would likely need her heart surgery (which she had when she was just 2 ½ months old).

Two months had passed since we last saw the pediatrician, whose office we were frequenting on nearly a weekly basis prior to surgery, and I have to admit that it’s been really nice raising our daughter without the constant oversight of her pediatrician, neonatologist, and cardiologist. We will be forever grateful for her physicians, but only since Hope was 3 months old have I or my husband been able to follow our instincts and allow Hope the right to do the same. Whereas we once had to report on every single ounce Hope ate in a day, which was a simple indication of the severity of her heart failure, and blow on her, wipe her face with a damp cloth, and shake her little arms and legs to keep her awake long enough to finish a bottle, we now are able to feed her when she’s hungry and let her sleep when she’s tired. What a difference a few months and a life-saving surgery can make.

So with the drama of a failing heart behind us and a baby thriving in the 75th percentile (we make it a point of measuring her on the DS growth chart and comparing her progress only against herself), we ventured to the pediatrician for our last visit to that office location before our big move to the suburbs in a few weeks. In addition to her regularly scheduled vaccinations, we discussed:

The American Academy of Pediatrics recommends hearing and thyroid testing for children with Down syndrome at age 6 months, although our pediatrician was pretty adamant that we take care of that at 9 months. Either way, I have her prescription in hand and can go anytime.

In addition, we got the green light for sunscreen use, swimming, and introducing solid foods. We expect to have lots of fun in the sun visiting my parents in the Poconos this 4th of July weekend, although we’ll probably hold the short ribs for Little Miss until next year.

2 responses to “A Symbolic Six Months”