I never took much notice of October’s Down Syndrome Awareness Month until 2015, when a positive blood test, thick nuchal translucency, and telltale heart defect all pointed to the likelihood that our baby would be born with Down syndrome. Thank God she was, on Christmas Eve that same year.

At a moms’ group this past spring, a very kind older woman wanted to learn more about our 3-year-old daughter and Down syndrome in general. I had more to share than I figured she wanted to know, so I asked her where I should start. She replied, “Well, does Down syndrome run in both of your families?” I was so taken aback by the question, assuming everything I’d learned over the previous few years was common knowledge, and I realized I’d been naïve in thinking I was the only one who had needed to start with the basics.

For centuries, up until embarrassingly recently, people with Down syndrome and other developmental disabilities were shunned from their communities: Research was lagging on the potential of these beautiful souls, towns were lacking resources, families were fed false information, and innocent little babies were being sent off to “a more appropriate setting.” Sometimes that setting was a place to die.

I’d love to say times have changed, but that’s not entirely true, which is why Down Syndrome Awareness Month is so crucial, not only for the families with Down syndrome but for those who might never have the chance to meet someone with Down syndrome because they’ve been misled into thinking that a person with a diagnosis is less than a person without.

The reason the older woman’s question at moms’ group was so shocking to me was because Down syndrome is by and large a spontaneous event. I was 29 years old when we conceived Hope, which gave us about a 1 in 1100 chance that she would have Down syndrome; any 29-year-old woman reading this article right now has the same odds. So to answer her question, Down syndrome runs in neither of our families.

Another misconception that permeates the Down syndrome community is that it can be cured, as if it were an infection or a disease. From the moment our daughter was conceived, every single cell in her body was created with an extra copy of the 21st chromosome. That’s not something that requires a cure. This extra genetic material exists down to our daughter’s core, so without it, she does not exist. To perpetuate the idea that Down syndrome is something to be cured is not only hurtful, but also dangerous to patients in other countries undergoing what in this country are known to be potentially lethal, illegal medical procedures masquerading as groundbreaking medicine.

In spite of all our concerns and the pressures leading up to our daughter’s birthday, as well as some big and small medical issues, once we could look into her beautiful eyes, she always made it clear what we needed to do. Our baby was a baby, who cried and cooed just like another. Our toddler is a toddler, who is learning how to communicate and to play nicely with others. Our child will learn to read and write. And we expect our adult will hold a job that satisfies her goals and interests. Our dreams are like any other parent’s dreams—we just have to fight a little harder to get there.

Thank you for fighting alongside us. For smiling back when our daughter blows you a kiss. For continuing to vote for special needs funding. And for understanding that there is nothing wrong with having Down syndrome.

Happy Down Syndrome Awareness Month, from our family to yours! 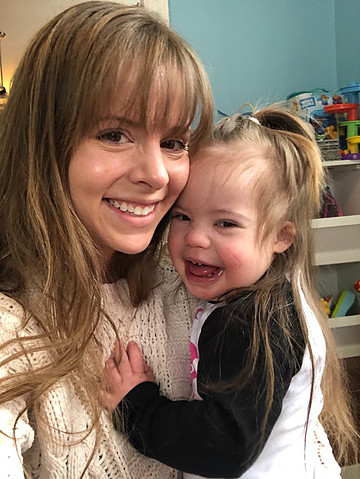 2 responses to “Blessed With a Little Something Extra”