Hope was admitted to the hospital four years ago today, yet this is the first time we’ve had to acknowledge the anniversary, thanks to common years safeguarding the memory since 2016. I’ve long promised the story of her 105-degree fever, so here we go.

Hope had to drink her bottles sitting up.

Hope’s feedings had grown increasingly difficult since her birth. Her heart failure made her terribly exhausted, and milk took a very distant second place to sleep. It wasn’t that she would take a long time to successfully drink an appropriately sized bottle for her age, but rather, at some feedings—scheduled every 3 hours around the clock and made up of modest amounts of breastmilk that had been fortified with Enfamil—she wouldn’t even wake up to drink, despite our desperate attempts by stripping her clothes, wiping cold washcloths against her exposed skin, and singing at the top of our lungs while tickling her all over her body. She was supposed to be growing bigger and stronger in preparation for her heart surgery, but time revealed she was fading, and no amount of milk or medication was going to keep her with us.

She was supposed to have her surgery on February 22, but pre-surgery testing revealed von Willebrand disease (vWD), a genetic blood clotting disorder, resulting in a delay of surgery. And so we stayed home, snuggling this precious little soul, fighting for more hours to help her drink and fewer hours of discomfort. We knew she was medically fragile and so we implemented small but important routines in our home, including my husband changing his clothes after having been in NYC all day. We had hand sanitizer in every room of the apartment. We barely went out, except to doctor’s offices a few times each week.

On February 29, my husband tried for his 5am feeding with Hope, which was, as was our new normal, unsuccessful. He left for work shortly thereafter, and she and I rested until it was time for her 8am feeding. She felt warm to the touch, so I decided to take her temperature, not thinking much of it. I don’t remember all of the readings throughout the morning, but I do remember she had a fever of around 100°F. My husband had just arrived at work when I called him and told him he needed to come home. Of all the days I’d been doing this on my own, this was one I knew I couldn’t handle alone.

Then I called my mom. She gave me the confidence I needed: Hope was too young and too fragile to develop any grade fever and to call the pediatrician. When I spoke with Hope’s doctor, she said that she could look at Hope but that she’d probably send us to the ER, so we might as well go straight there.

During the time it took my husband to rush back home, Hope’s fever had climbed to 102°F. I had a bag packed for the day and one overnight (prepared for “the worst”), and off we went to the emergency room of the NewYork-Presbyterian Morgan Stanley Children’s Hospital, the hospital where we knew she would eventually have her surgery.

Triage shouldn’t have taken as long as it did, but there we were, our 9-week-old baby girl panting as she chugged her bottle; so thirsty, finally drinking, but so out of breath from the fluid collecting in her lungs. When the staff called us in, they did the routine weight check, symptom review, and temperature reading. Her temperature had climbed to 105°F.

Hope stabilized in the ER trauma room, awaiting admission to the PCICU.

The nurse scooped her in his arms, told us to follow him, pressed a button on the wall, and ran down the hall. We threw our things in the stroller and jogged behind him, along with more than a dozen medical staff who had all descended on the room we found ourselves in: trauma. I thought that was just some drama made for the movies, but wow, was that nightmare real.

First, they tried to place an IV, but her size and dehydration made it too difficult, while her situation was determined to be too urgent to wait. My husband and I stood in the corner of the room, two flies on the wall of a perfectly orchestrated event. The attending was calm and came to us, explaining that they were unable to locate a vein and needed to drill into her bone for an intraosseous line (IO). They were treating her for suspected sepsis, and after being briefed on the risks of the procedure, including bone fracture, and our discussing her heart defect and vWD, we granted our permission for the IO.

The drill, if I remember, was pink and about the size of a small glue gun. A resident tried for the first IO in Hope’s left femur and failed. The attending took over and drilled two more times, both successfully, once in Hope’s right femur and once in her left tibia. She was masked with oxygen. Antibiotics began coursing through her body. And when she was stable, we left trauma and were admitted to the pediatric cardiac intensive care unit, or PCICU—9 Tower.

The nurses kept Hope comfy and cozy in her PCICU bed.

We were as prepared as any parents could have been for open heart surgery, but this fever was a cruel surprise. The nurses spent the next two days trying to collect fecal samples, working to get her temperature down, moving her from CPAP to nasal cannula, and testing for many different infections, including one in her heart. Four days later, with a stable temperature and a final diagnosis of “fever of unknown origin,” we took up residence on the 6thfloor, the inpatient cardiac unit, known as 6 Tower.

Our formerly stoic pediatrician called for updates and told us she was praying for Hope. Friends and family called to tell us their churches were holding specially designated prayer services and a healing mass for Hope. A set of friends visited with a care basket. Another set of friends picked up a key to our apartment and looked after our cats over the following weeks. My overnight bag lasted a few days, but in the end wasn’t enough for our open-ended stay, so my husband shopped for us in Columbus Circle, conveniently located halfway between his office and the hospital.

The wait on 6 Tower was grueling. Knowing that my husband would need to take off from work when Hope had her surgery meant that he’d have go to into the office while we were in purgatory, awaiting judgment on when Hope could proceed with her life-saving operation. She never developed an infection in her heart, she didn’t have sepsis, and her bones thankfully did not fracture during the IO placement. We understood, even then, that although the fever was terrifying, it removed so many fears about Hope’s post-op stay: We learned the layout of the PCICU, the nursing staff, the neighborhood, and other logistics that allowed us to focus completely on Hope and these precious days we had with her before entering into the unknown. 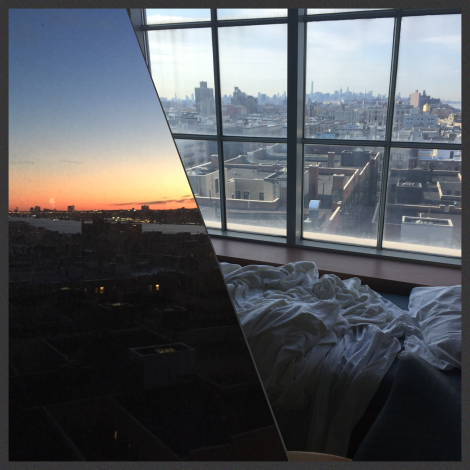 View out the window on 9 Tower. Left, overlooking the Hudson River. Right, looking south down Manhattan, our narrow head-to-toe sleeping arrangement in the foreground.